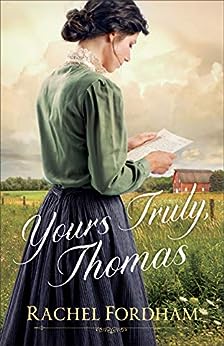 Yours Truly, Thomas by Rachel Fordham

For three years, Penny Ercanbeck has been opening other people's mail. Dead ends are a reality for clerks at the Dead Letter Office. Still she dreams of something more--a bit of intrigue, a taste of romance, or at least a touch less loneliness. When a letter from a brokenhearted man to his one true love falls into her hands, Penny seizes this chance to do something heroic. It becomes her mission to place this lost letter into the hands of its intended recipient.Thomas left his former life with no intention of ending up in Azure Springs, Iowa. He certainly didn't expect a happy ending after what he had done. All he wanted to do was run and never look back. In a moment of desperation, he began to write, never really expecting a reply.When Penny's undertaking leads her to the intriguing man who touched her soul with his words, everything grows more complicated. She wants to find the rightful owner of the letter and yet she finds herself caring--perhaps too much--for the one who wrote it.

Such a interesting story line, one that I've never read about before.  I was drawn into the town of Azure Springs and felt like somehow I would want to be one of them.  So many kind people who cared deeply about one another. They all had their dreams of a brighter tomorrow, hope for love, and they leaned on their faith.

I loved all the characters, they were so unique.  They helped make the story flow so well and I didn't want to put the book down.  Margaret stood out for me the most if I had to pick one.  She helped people and gives them a nudge in the right direction. Not always a gentle nudge but a caring one.  She did surprise me about Honey, but she was right and I give her praise for sticking up for her business.

Every bit of this book to me was about courage and forgiveness.  We only live this life once so it's best to put both of those into practice often.

A great, great read that went by too fast!

Posted by Vickie @Vickie's Kitchen and Garden at 2:20 PM