Energetic widow Mattie Bender Schwartz is working day and night to get Promise Lodge going.  She's also hoping the change will help her son Noah's heart to heal after his broken engagement.  But his former fiancee, Deborah, is looking for a fresh start too.  Filled with regret, and cast out by her dat for a reason she can yet reveal, Deborah can only pray Noah will forgive her foolishness.


Deborah is the last person Noah expected to show up at Promise Lodge. But with her cruel words still ringing in his head, he’s reluctant to accept her apology—even if the Old Order ways demand he try. If only he could obey Christ’s most important commandment: love one another. But one thing is certain—his mother and aunts, and their beloved Preacher Amos, will do their best to help him get there.

You can read my Review of  the Promise Lodge  here:

“What do you suppose happened to Deborah that she’s not telling us about?” Roman asked as he watched the fireflies rise from the grass. “There’s a story behind that bruise on her neck.”

“She dodged that issue when I asked her about it,” Noah remarked gruffly. “I doubt the women’ll quiz her about that handprint. They probably figure Eli got peeved and grabbed her.”

He didn’t like the path his suspicions were following, but what would it solve if he kept them to himself? “Personally, I think Isaac Chupp did that to her . . . maybe because Deborah saw him in the Bender barn,” Noah speculated. “You’d think she’d know better than to tangle with the bishop’s boy. But then, I suspect Isaac’s the reason she walked out on me.”

Roman scowled. “From what I’ve seen, Isaac flirts with all the girls. That doesn’t mean it’s right if his drinking gets out of hand and other folks lose their barns—or a husband—because of it.”

Deborah is the last person Noah expected to show up at Promise Lodge. But with her cruel words still ringing in his head, he’s reluctant to accept her apology—even if the Old Order ways demand he try. If only he could obey Christ’s most important commandment: love one another. But one thing is certain—his mother and aunts, and their beloved Preacher Amos, will do their best to help him get there.

“Jah, there’s that.” Noah closed his eyes against a fresh welling-up of resentment. Why did one bad thing lead to another and another, like lined-up dominoes falling in succession? Truth be told, Deborah’s rejection had been just one in a series of disasters. “Seems like the trouble started early last year when Dat’s diabetes took him out, and then Mamm’s parents succumbed to the flu, which left Aunt Rosetta alone in that big house. And then Uncle Willis died fighting his barn fire, which left Aunt Christine a widow. That’s a lot of trouble in our family lately.”

“Let’s not forget how Bishop Obadiah kept harassing Mamm and the aunts to get married, practically before Uncle Willis was cold in the ground,” Roman reminded him. “It was only a matter of time before any one of them snapped. They felt God was leading them to this place, so they found a way to afford it.”

“And you agree with that? You like it here?” Noah challenged. After living in Promise for three weeks, Roman was discussing their life-altering move in a tone that sounded downright happy rather than stoically accepting of the hand God had supposedly dealt them.

“You could’ve stayed in Coldstream,” Roman reminded him. “You had a welding apprenticeship, a gut opportunity to—”

“And why would I want to work in Eli Peterscheim’s shop, where I’d see her all the time? And where would I live?”

Roman shrugged in that exasperating way he had. Because he was three years older than Noah, he though he was so much wiser. "Even the Lord's will allows us to choose. Frankly, I made the move because none of the Coldstream girls interested me," he admitted. "Sure, Mamm would've fussed if either of us had stayed behind, but she was determined to make a go of this place. While other families buy these lots and repay the initial investment Mamm, the aunts, and Amos made—and they get Rosetta’s apartments and the produce stand going—I figure to keep managing Aunt Christine’s dairy herd and selling the milk. I think we’ll get that old orchard producing again someday, too.”

“You really believe this Promise Lodge thing’s going to fly?” Noah challenged. “I see a lot of opportunities for falling flat on our—”

“Since when did you become such a naysayer?” Roman countered. “Mamm’s willing to try something new instead of struggling to keep up a farm in Coldstream. Plenty of folks have expressed their doubts, but she and Rosetta and Christine refuse to believe them. Maybe we should be taking notes.” 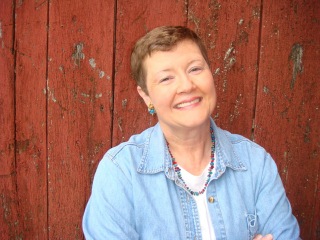 Many moons ago—like, in 1983 while she was still a school librarian—Charlotte Hubbard sold her first story to True Story. This launched her into writing around seventy of those “true confessions” stories over the years, and she’s been a slave to her overactive imagination ever since. Over the course of her writing career, she has sold nearly 50 books—most recently, Amish romance series she’s written as Charlotte Hubbard or Naomi King.
Charlotte lived in Missouri for most of her life, so her Amish stories are set in imaginary Missouri towns. These days she lives in St. Paul, MN with her husband of 40 years and their Border collie, Ramona

Click on these links to buy this book now!

You can find Charlotte here:

Charlotte will be awarding a $15 Amazon or B/N GC to a randomly drawn winner via rafflecopter during the tour. You can enter for your chance to win here:

a Rafflecopter giveaway
Posted by Vickie @Vickie's Kitchen and Garden at 4:00 AM
Email ThisBlogThis!Share to TwitterShare to FacebookShare to Pinterest