Book Review: Everything She Didn't Say by Jane Kirkpatrick

The links in this post may contain affiliate links.   When you order from something from one of my links I receive a small commission with no extra cost to you.  You can read my  full disclosure policy  and privacy policy here.   Thanks so much for helping support Vickie's Kitchen and Garden! 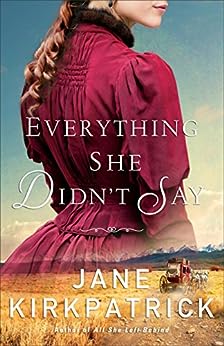 Everything She Didn't Say by Jane Kirkpatrick

In 1911, Carrie Strahorn wrote a memoir entitled Fifteen Thousand Miles by Stage, which shared some of the most exciting events of 25 years of traveling and shaping the American West with her husband, Robert Strahorn, a railroad promoter, investor, and writer. That is all fact. Everything She Didn't Say imagines Carrie nearly ten years later as she decides to write down what was really on her mind during those adventurous nomadic years.Certain that her husband will not read it, and in fact that it will only be found after her death, Carrie is finally willing to explore the lessons she learned along the way, including the danger a woman faces of losing herself within a relationship with a strong-willed man and the courage it takes to accept her own God-given worth apart from him. Carrie discovers that wealth doesn't insulate a soul from pain and disappointment, family is essential, pioneering is a challenge, and western landscapes are both demanding and nourishing. Most of all, she discovers that home can be found, even in a rootless life.With a deft hand, New York Times bestselling author Jane Kirkpatrick draws out the emotions of living--the laughter and pain, the love and loss--to give readers a window not only into the past, but into their own conflicted hearts. Based on a true story.

This is a story about a young woman , Carrie, who travels with her husband to the American West.   It gives you her inner most thoughts, not what she sometimes could really say or do.  It reminds me that women have come a long way in our history.

The views where described that I felt as though I was seeing them with her.  Believe me, the hotels, the railroad, and the food all were not as I've thought of them in my head.  I can understand how  people might have been duped into coming to settle there with flowery words.

Carrie was a good strong character in the book and at times I felt as though I connected with her.  Throughout her life no matter what hardships she tries to use her gifts that God gave her to help her fellow mankind whenever she could.

I have to admit though this book for me was rather slow reading. I actually skipped a few pages and felt as though I didn't miss anything.  That happened more as I went along till I finally came to the end.  Overall though, it was an interesting read.

I received this book from Revell for free. All opinions are my own

Posted by Vickie @Vickie's Kitchen and Garden at 8:42 AM