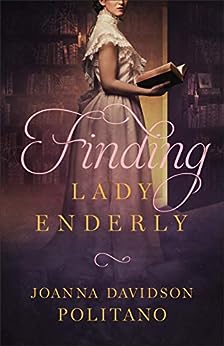 Raina Bretton is a rag woman in London's east end when a handsome stranger appears in a dank alley and offers her a glittering smile and a chance for adventure. Rothburne Abbey has a unique position for her, one that will take her away from her hardscrabble life and give her a chance to be a lady. Things she could only dream of might be coming true. But some dreams turn out to be nightmares.Though Raina has traded squalor for silk and satin, something about the abbey is deeply unsettling. As she wrestles with her true identity, the ruin, decay, and secrets she finds at the heart of the old mansion tear at her confidence and threaten to reveal her for who she really is. Only one man stands between her and the danger that lurks within--and only if he decides to keep her biggest secret hidden.

The scenes in Finding Lady Enderly played out in my mind, they were described so well.. the squalor, the carriages, the castles, and the balls.  Then there was the romance, always at the forefront but yet at times fleeing and so far away.   Usually not my genre of reading, I never once lost interest and was hooked from the first page.

Raina had a Godly conscience and that gave her doubts about what she was doing. She made mistakes but she admitted to them, so she remained my favorite character throughout.

The mystery remained a mystery to me for a very long time.  Riddles came and went about who "she" really was, keeping me in suspense.

A rags to riches story that kept me turning the pages. What a great, great historical read!

This book was given to me by Revell.  All opinions are my own.

As a Amazon affiliate I earn a small percentage when you purchase items from one of my links (the item doesn't have to be what I have linked here).  Thanks so much for helping to support Vickie's Kitchen and Garden!

Posted by Vickie @Vickie's Kitchen and Garden at 9:47 AM
Email ThisBlogThis!Share to TwitterShare to FacebookShare to Pinterest