My 1st Grocery Shopping trip for No Spend/Low Spend January 1/11/20! 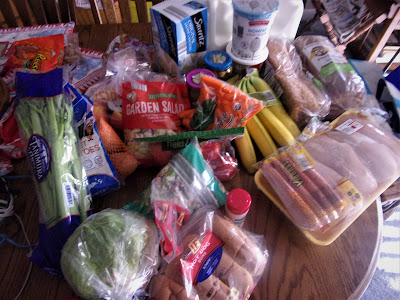 Our rainstorm has quieted down quite a bit from the early morning hours.  It's the lull before the next storm they say.    So one of the bad things about rain in Michigan in the winter, is that our ground is frozen and the rain has no where to go.  Our backyard is pretty much flooded right now.  Good news is the sump pump is working wonderfully.

Now what comes next?   Lots of ice coming this evening they say.  We did the last of our preparations yesterday- we made sure to get more gas for the generator, charged everything, and checked all the flashlights to make sure they worked.  We put flashlights in every bedroom and then we have a central location for the rest.  We were pretty much prepared anyway so we just needed to wrap a few things up.  Ice storms are pretty but are so dangerous.

We also did our grocery shopping the first of the week and we are good on that front.  Here is the total for the week:

The mistakes -we both put in a bag of apples in the cart and no one noticed.  Not even when we put in on the belt!  We will eat them.

Relish-  I thought it was another jar of pickles he put in the cart.   I have 2 jars of relish in the pantry.   Now we are stocked up!


How did you do grocery shopping this week?

Posted by Vickie @Vickie's Kitchen and Garden at 8:30 AM

I have a lake in the back yard as well. So much rain. At least we aren't going to get the ice ad snow. Stay safe and hope you don't lose power.
Good shopping. Sounds like you are prepared.

We are going through the lower end of the same storms you are dealing with, I think. We had to go to our basement last night for two tornado warnings. Thankfully they were in the same pocket of the storm so we only had to go once. Such an ordeal...I pack a bag with a change of clothes, our medications, snacks, water, dogfood, phone charger,ect. Just in case we get trapped. My husband grabs the firebox with important papers & cash. Our basement is a garage under the house so we go sit in the car to wait it out.

Thankfully this time nothing touched down. The local weatherman reads the radar to us. He told people to take safety...that there was circulation in the clouds so something could drop at any time. I haven't heard yet if there were any that did touch down near me.

It came through at supper time. My son was still sleeping (he works third) so my daughter-in-law had to get him out of bed to take shelter with them. Fun times.

That Aldi Kale salad is so good!

Yesterday we went to the grocery outlet store here and found some great deals including Jimmy Dean roll sausage for $1.50 and a 5 pound chub of deli chicken breast for $7.99. We will run that through the slicer and freeze it in one pound packages. It is teriyaki seasoned but another shopper told me that it is just the coating and you don't taste that at all. I love this store for the people who shop there. Everyone is willing to give reviews on products they have bought before and they are just like a community of strangers. Also Rice a Roni for .69 a box, chamomile tea for .99 a box, Duncan Hines cake mix for .79. While we were there the Pepperidge Farm bread arrived and we got first pick. Hamburger and hot dog buns and sandwich rolls and sourdough bread and raisin bread all for $1 a package and all dated at least ten days from now. We need to shop that store more often but I have to be really careful to only buy what we will and can eat by the use by dates. They had avocado oil for 2.99 and it is 7.99 at ALdi but I did not know if it would be good after the date at the end of February.

Just so the lake stays in the backyard right? Lol. Starting to sleet now...we are moving right along with this storm. It is good to be prepared..hope we don't have any holes in that area. Have a great day.

Oh man so dangerous..we said if all this blows over its better to be safe than sorry. I see you all think like that too! Such wild weather Jenny. I'm so glad your ok.

I've heard about those grocery outlet stores. You are so lucky to live by one. You just can't beat bread for a $1.00 a loaf! I've never tried avocado oil. That's quite a deal on it. We use olive oil but it does last quite awhile.

Great job on your frugal shopping! So far--I'm happy to say that I haven't been grocery shopping yet, but I do live by myself, so it's much easier to get by. I did have to open one of my quarts of shelf-ready milk--can't think what else it's called. I have to go to Walmart on Monday to pick up a prescription, so I won't waste the trip by not buying anything, but I'll be careful. I'm trying to eat out of my pantry, refrigerator, and freezers. Have a good week!

That is a whole lot of food for under$50.00. We didn't need a lot this week so our grocery bill was just a little over $20.00. We try and stock up when there are holiday sales so meat will not be an issue this next month. Here in Wisconsin we were to gave gotten up to 12" last night but only got a light dusting. I hope it stays that way. We have renting since summer and love it here, they take care of snow removal right away, but we did go get a shovel. Our dog Jordy is a Shih Tzu and we have to shovel a path or he would be lost in the snow. Hope no one gets the really bad weather.

We had flooding around us and in our backyard then some sleet last night and snow. The storm was a dud and I too am glad! I'm so glad you love Wisconsin. It always sounds to me like a beautiful state. I remember well when we had a dog shoveling paths for them then make a bigger circle at the end so they can turn around ha ha! Have a great day!

Your doing well! I love that you haven't shopped yet! I should open my shelf ready milk -thanks for the idea Kay!