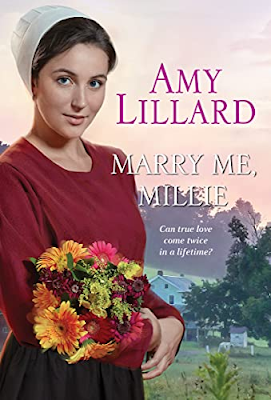 When her young husband died unexpectedly, Millie Bauman thought her life was over too—until she learned she was carrying his child. Now, as she awaits the baby’s arrival, Millie’s sure her future will revolve around motherhood, the B&B she runs with her Aunt Sylvie, and the beloved Whoopie Pies her Widows Club whips up each week. But when a handsome newcomer arrives in town, Millie is intrigued, and the club wonders if Millie might find a second chance at love . . . Henry King plans to stay in Paradise Valley long enough to take care of some family business, and hopefully mend the heartache of his own lost love. As Henry and Millie cross paths, it’s clear their neighbors are gently trying to play matchmaker. Not wanting to disappoint, the two pretend to play along—but life gets complicated when a true and tender affection grows. As Millie gets ready to welcome her baby, they must rely on faith and fate to decide if they should risk their hearts on love again . . .

Marry Me, Mill is such a wonderful book that kept me turning the pages.  The characters felt so real that I felt like I knew what was in each characters heart and mind.

I thought of lot of Henry who came to realize who he wanted in his life.   He did his best to try to break through Millie's insecurities, even though he had many of his own.

Two more lovable characters were Grandpa, Vern and Millies Aunt, Slyvie.  Both of them were not quite done with this life, contrary to what others might think.  They were hard working and cared for others.  They could have a book all their own!

There is a bonus at the back of the book...recipes are included!  Now, that's always a favorite of mine.

What a great enjoyable read!

This book was given to me by the publisher.  All of my opinions are my own.

Posted by Vickie @Vickie's Kitchen and Garden at 9:00 AM
Email ThisBlogThis!Share to TwitterShare to FacebookShare to Pinterest