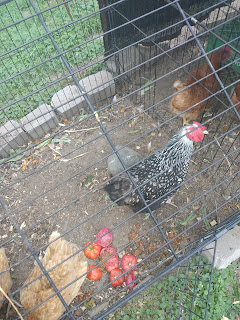 I now have 6 chickens in my coop.  This gives me enough eggs without constantly running out and I'm even able to give some away.  With the addition of these last two chicks, I've come to know more than ever about the pecking order...than I ever wanted to.

One of the Wyandotte chickens, that I will refer to from now on as Miss Meany,  has been the last of the pecking order for over a year but now has decided to move up when I put in the two Isa Browns.  She has decided she will no longer be the last and has become the bully herself.  She will peck at them and chase them when they try to eat the food I throw in there.  Those littles now to sneak up behind her and get some food before she spots them.  Then when she catches them in the corner of her eye, they had better run fast and they know it.

No need to worry about those two littles, they have two places to escape in the run.  The run has two roosting bars and I have put in milk crates.  She is a fat hen so she can't reach them there.   You can see one green milk crate in the back of the run.

What cracks me up is when I let all the chickens out to roam.  The littles stay back and let the big ones go through first while acting like they are coming out too.  Then when they are all out they run back in to the coop as fast as they can.  There they eat and drink to their hearts content without her bothering them.  Oh they can eat and drink anytime but this way they are not worried about her because she is in my garden.  Stinker. 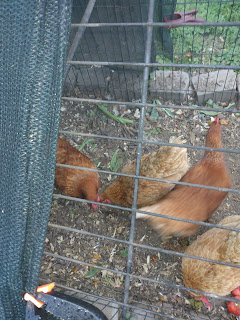 They do have an angel in the run, named Miss Pretty.  I have caught her telling them (in her own way) to come back into the pen.  I think she tells them, this is how you get those delicious (and costly) meal worms.  I have also caught her happily roaming the backyard with them.  This morning I caught her, sharing her food with them.  She is in the middle and the Littles are on each side of her.   She has become their Mother and they love her.

All I got to say is they had better watch out these two little hens, they are growing fast and will be moving up in this world.  I wonder where Miss Meany will land.

**As a Amazon affiliate I earn a small percentage when you purchase items from my Amazon affiliate link here  Thanks so much for helping to support Vickie's Kitchen and Garden. I'm always glad you come by!

Posted by Vickie @Vickie's Kitchen and Garden at 8:25 AM
Email ThisBlogThis!Share to TwitterShare to FacebookShare to Pinterest
Labels: chickens

Well Miss Meany, two against one might be the end of your reign!

It will be interesting to find out ...I'll be updating in a few months! Have a great weekend Lana!

Funny how animals have a hierarchy as well as well as people. Once given the chance, many want to be in control and get nasty. I hope it works out well for the younger ones.

So true about people ...some just think they are better than others. sad how that goes. Some though are born to lead.
I love how miss pretty cares about the littles.