Part of our No/Low Spend January challenge has been to cut our grocery bill down to $50 a week.  This week we did it.   You can see we bought the essentials, eggs, milk, vegetables, and bologna. Around here it's a necessity to have bologna!  We bought some other food items that seem to make us happy. With just a little finagling we stayed under the budget this week. 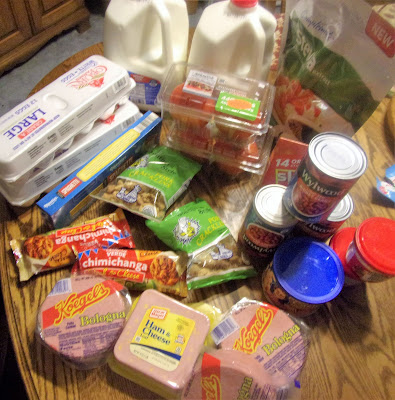 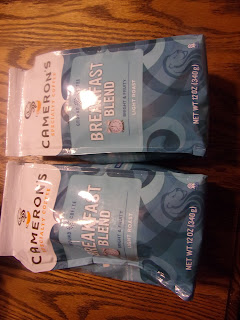 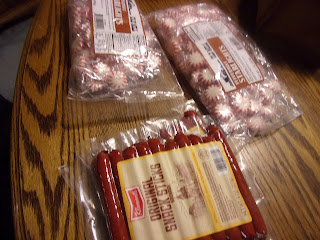 When we went to Menard's I realized pretty quickly that we would go over our food budget so I decided to use part of my spending money ($20). 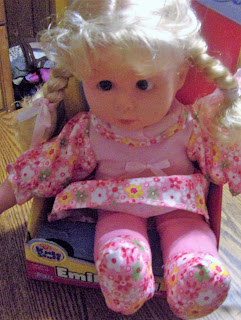 Walking into Rite Aid I couldn't pass up going down the Christmas isle.  I'm glad I did Christmas items were marked 75 percent off!  I bought this doll for $2.50!  It will go in an Easter basket. 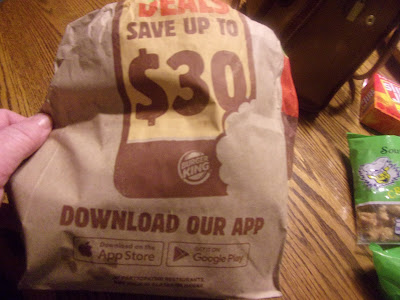 Sometimes when the grandkids are here they look at our dinner and say no way. We found that they love Burger King's chicken nuggets.   Right now they are 10 for $1.00.  We bought $5.00 worth and froze them so they are ready to pop in the microwave when they come.  We have been doing this once a month for the past little while.  They don't like any sauce..just ketchup.

I don't always know what the husband buys with his $20.00 but this week I witnessed it.  When we went to Save a Lot there was a gas station across the street that was quite a bit cheaper if you paid with cash.   He couldn't resist.   Don't worry he still has money left in his pocket from last month though.

What's been on the dinner table?

I went out to the freezer to get bacon with the idea of making some fried apples to go along with it (sweetened with Truvia).   When I opened up the freezer pork chops fell out at me and came right out of their big ziploc bag, the rolled across the garage floor.   Luckily they were still in their little ziploc bag so I decided I would take the easy way out and just fix them instead.

So I came in with my arms full and decided to quickly thaw the pork chops in water.   I then took a nice walk (50 degrees) and just never thought to look again at them.  Imagine my surprise when the pork chops thawed out that they turned out to be chicken.  The big bag is the one I mark and I had threw it away not even looking because you know, I knew it was pork chops 😏.  Well, I quickly recovered after the shock and dug out my George Foreman so I could grill some chicken.  So we went from bacon to pork chops then from pork chops to chicken.  Yep, it was that kind of day.

Today is a planned birthday dinner out.  O Happy Day!

Posted by Vickie @Vickie's Kitchen and Garden at 8:52 AM
Email ThisBlogThis!Share to TwitterShare to FacebookShare to Pinterest
Labels: Frugal