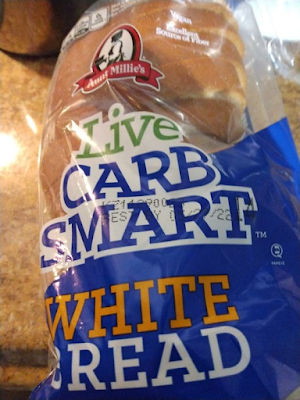 So, we decided to go to Sam's on Sunday where we have been able to get our low carb bread for about $3.50 a loaf.    Listen when you buy a loaf of bread for $3.50 a loaf, you eat the heel.  Anyway the shelf was empty.  Second Sam's and still no bread for us.

It wasn't a wasted trip though, we went ahead and bought everything else we needed though while we were there.  Like their roasted chicken and they had a good price on the strawberries.  That's where I ran into him, the produce department.  The older gentlemen (older than me) in a motorized wheelchair as I was picking out my strawberries.  He blocked my path and said why did they move the produce dept. (like I worked there).  I hadn't even paid attention to that, but that made me look and I realized that they had temporally moved it across the aisle.  His wife and him seemed really upset by that.  Some people can't handle change I guess, even temporary.

Before I could move away, he looked in my cart and said, I wouldn't buy that chicken at all, what a waste of money (a $5 chicken already cooked).  I said really, and he explained how there was hardly any chicken left after you deboned it.  I said oh, ok.   I thought to myself he doesn't know, I could have have a family of 8 at home and we could all debone that chicken in one meal! LOL

Then he started talked about my strawberries I had in my hand and said they would have no taste because they were so big.  Well.

I left him after that, just smiled, and went on my merry way.  I don't remember, but I think I said two words in the whole conversation.  Sometimes that's the best.

I don't judge other people's cart.  I'm not sure about their situation and usually I'm in my own little world, looking for my deal. I've heard so many people talk about well she was on food stamps and bought this or look at all that pop they bought, you know that's not good for them.  It's none of my business really. They are getting what they need for that moment.

As I was in line telling my husband the story, the lady behind us heard it and said she was buying 2 chickens for her two dogs.  She said it was cheaper than dog food.  I know nothing about dog nutrition but this sounds so smart.

My advice: don't go to Sam's on Sunday.

FYI:  I found the bread at Meijer, it's not as cheap though.  I'm going back for the pop I found on sale by the way.

Menu for this Week:

Saturday              Grilling out (no rain in the forecast) hamburgers. hotdogs, and whatever else we can find. 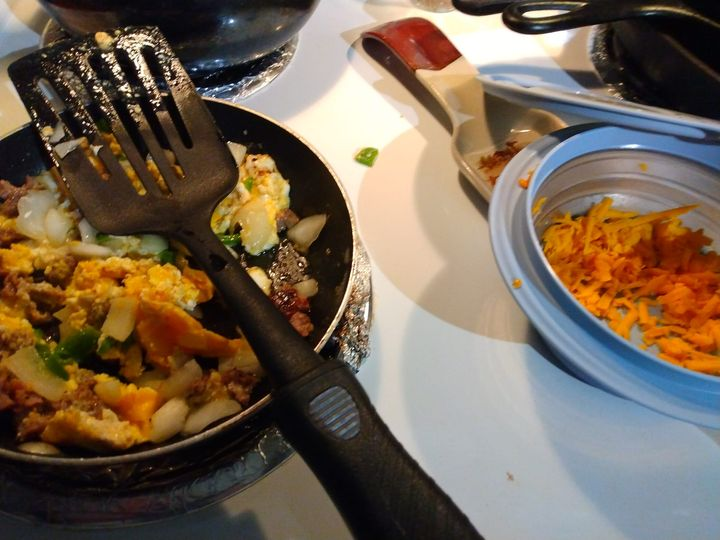 Breakfast:  there were 3 sausage patties left from dinner yesterday so I made three breakfast burritos this morning with 2 and I will warm up the other sausage for me in the morning.  We will also have oats and fried bologna the rest of the week.

What's on your menu?

Posted by Vickie @Vickie's Kitchen and Garden at 7:05 AM
Email ThisBlogThis!Share to TwitterShare to FacebookShare to Pinterest
Labels: Frugal, Money Saving Ideas

Sounds like somebody got up on the wrong side of the bed Sunday! Glad you didn't let him bother you!I have an excellent recipe for gluten free bread that I can share if you'd like.

My menu this week:

Wednesday- Chicken paprika, noodles or rice, some kind of vegetable

Friday- not sure yet. Probably soup as it is going to rain

I make my own dog food from chicken too. Funny story!

Jennilee your menu sounds delicious. You know I would love your recipe to try out on the husband. sounds like our supply for our bread maybe limited so it would be good to have a backup recipe. We love a sandwich. thanks! Vickie

We don't have a dog but that just made so much sense to me. You guys are smart Little Penpen!

Grrr. These kind of people irritate me. They are almost as bad as people that look at what you are having for lunch and act like it gags them. I try to ignore them, though. Life's too short to waste effort on folks like that.

Our Sam's has not had the chickens lately. Sad. I think old people just think everyone wants to know their opinion. My FIL was like that but later when I thought about what he said he was pretty much always right. But, anyone who blocks my way in the store to give me their opinion and keep me from shopping makes me mad.

I will admit to being concerned for children when I see a cart full of junk food. Kids running past the house with a bag of chips and a soda for breakfast on the way to the bus in the morning really does make me mad at the mother. I do agree though that our carts do not reflect what we buy. My Aldi cart is loaded with produce and healthy foods but my Publix cart is often things like cereal and ice cream because that is what I glean from their sales.

We have White Sausage Linguine, Korean Beef and rice, pork chops and potatoes of some sort, creamed chicken and biscuits and pizza on the menu this week.

Baggy's Mama, So true life is too short to deal with cranky people!
I can't believe they would act like your lunch gags them..some people!

Lana, Something in your menu always grabs me..that Korean beef and rice sound so good!
Yes so true about going to different stores to get something else. We always go to Walmart for our ice cream. I bet we look bad doing that.
I always hope these young children will grow up and start eating better. I hope so.

I don’t want to sound haughty or pious but my (limited) impression is that people are really starved these days for interaction with others. The isolation we've all experienced has left many unable to ‘engage’ as normally as in the past. I think you handled the situation well. Shopping has become more challenging for all of us, almost a different realm, and I pray that my own conversations, self initiated or not, are filled with grace!

Commie so true..we are wanting that conversation as well. Like you I just hope my end is more encouraging and filled with grace. Maybe with time he will be better too.

Vickie oh dear probably a person who needed to talk to someone perhaps ??. We make a point of not hearing, seeing or knowing anything when we go out shopping and certainly would not comment on what anyone has in their shopping trolley as it is none of our business nor would we make it so :) .

We have on a number of occasions been asked by shop staff if we own a cafe as we had bought a lot of flour for bread making, how many children we have (as we had a bit in our shopping trolley) as we shop monthly etc and the list goes on. Just said oh we make our own bread, shop monthly or live out of town which we do in the country. I find it all rather amusing actually and as I cannot lie I thought to on numerous occasions say I have 12 children but didn't (as we have none) :) . Even had a comment oh that total is very good for a month of shopping.

Truly you just got to love them :).

We don't menu plan as we just stock everything we eat and rotate through meats we have being steak, chicken, bacon and mince with usually homegrown veg sides and also have meatless meals too.

You did well Vickie just to be nonchalant and only say a few words and I am like that too :).

Have a great week ahead.

Lorna, I have had a lot of questions from staff like that too. Your right they have no idea and just are looking for something to help make conversation. I kind of ran off a little faster than normal (in a polite way) because I had even more in my cart! We have talked and laughed about the older man a lot these last few days. You got to laugh about it!
You have a great week ahead too!
Vickie

I’m usually in my own little world too when I’m shopping and don’t look into others carts. I like grocery shopping so I’m usually having fun looking at everything rather than looking at what other people are buying. One time Bailey and I were picking up some dried cherries at Sam’s club and this gentleman behind us said he had been looking for them everywhere as his wife wanted them and he thanked us for mentioning them out loud. It was sweet.

Belinda it's always good to hear from people like that. Dried cherries sound so good..I've seen them there too!
Have a good day!