This post is part of a virtual book tour organized by Goddess Fish Promotions. Bobbi Smith will award a $10 Amazon/BN GC to a randomly drawn winner.  You can follow the other stops on this virtual book tour here. 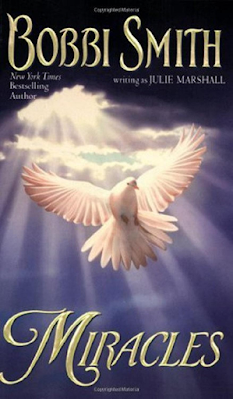 Miracles by Bobbie Smith
For the devout members of Lydia Chandler’s prayer group, faith provides a shining light through even the darkest times. George Taylor is given the grace to face his cancer and leave a lasting memorial. Jim Hunt is granted the wisdom to turn away from the temptations of alcohol and peer pressure. And for lovely Lydia, who refuses to despair in the ugly side of life that her reporting often uncovers, there is an earthly love to bring laughter and joy to all of her days.
Read an excerpt:
Lydia sought Detective Steve Mason out at the Above and Beyond Police Fund-raiser for injured officers to apologize for the headline her boss had used in the newspaper that day. As they were sitting at a table with another couple, the other woman, Marcie, asked, “Steve, why don’t you bring Lydia with you to the barbecue in two weeks?” She’d noticed how they seemed interested in each other.Steve looked at Lydia. “Would you like to go?”“It sounds like fun.”“We’ll see you then,” Marcie said as she and her husband stood up to leave.“So, Steve,” Lydia said, “what do you do when you’re not working?”He gave a derisive laugh. “It seems all I do is work.”“Do you have a family?” She’d noticed he wasn’t wearing a wedding ring, but that didn’t mean he was single.“I’m not married,” he answered. “What about you?”“I’m single, too.” Lydia was amazed by how anxious she’d been to hear his answer. “What do you do for fun?”“When I do manage to get time off, I like to ride my Harley.”“That’s awesome.”“You like motorcycles?”“Oh, yeah.”“I’ll take you for a ride sometime.”“You’re on.”“What do you like to do?”“I read a lot.”“We’ve got to liven you up a bit.” He paused and looked around. His tone was conspiratorial when he asked, “You want to do something wild and crazy?”“You aren’t going to get me arrested, are you?”“Now, there’s a thought.” He slanted her a knowing, almost wicked grin before saying, “No, I wasn’t going to get you arrested. I was going to ask you to dance.”
.
About the Author:After working as a department manager for Famous-Barr, and briefly as a clerk at a bookstore, Bobbi gave up on career security and began writing. She sold her first book to Zebra in 1982.

Since then, Bobbi has written over 40 books and 6 novellas. To date, there are more than five million copies of her novels in print. She has been awarded the prestigious Romantic Times Storyteller Award and two Career Achievement Awards. Her books have appeared on the New York Times Best Seller List, the USA Today Best Seller List and the Wal-Mart Best Seller List.

I appreciate your review and getting to hear about another book I didn't know about until now. Thank you for sharing and for this giveaway also.

Hi! I hope everyone enjoys Miracles.

thanks for coming by Bobbi..I'm sure they will enjoy your book!

I have never read this author before, it sounds interesting.

Thanks for having me, Vickie.

I think your book sounds wonderful