The Seven Day Resurrection by Chevron Ross Review and Giveaway!

The Seven-Day Resurrection by Chevron Ross tour presented by Goddess Fish Promotions plus a giveaway of a $75 Amazon/BC to a randomly drawn winner (enter below). 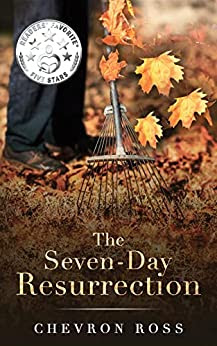 Len Holder thinks his mother is dead – until she reappears one morning in his living room.

And instead of her burial clothes, she’s wearing a Dallas Cowboys warmup suit.

At seventy-eight, Len considers himself a failure. He spent years taking care of Mom while his brother Joey became a famous sportscaster. Now he lives alone, tinkering with a novel he can’t seem to finish.

For a week, Len relives a strained relationship with Mom while other mysteries pile up. He keeps hearing fragments of Joey’s radio show. His sister reports disturbing phone calls. Strangers he meets look like people from his past. Another stranger has taken over his insurance office.

Then Len gets word that his beloved boss Miranda has been gravely injured in a car accident. Eventually, Miranda’s fate and a shocking secret from the past reveal that Sharon Holder’s resurrection is not what it seems to be.

The Seven-Day Resurrection is a must-read for anyone who has been thrust into the role of caregiver.

Reliving the past while dealing with the present seems to be the subject of The Seven Day Resurrection.  Scenes from his past come and go in Len's mind and Chevron Ross takes us along for the ride.

I love that Len honors his Mother and helps her has she battles a disabling disability in her old age.  When she comes back from the dead though secrets come out, regrets are spoken, and life is understood a little more.

Seemed as though I had my endings for this book right from the start.  None of them were correct.  The suspense kept me hopping from one scenario to the other till it finally came to it's rightful end.

This book takes you from sorrow to joy and back again.  Very different but what a great read!

They dated regularly until May when Loretta began talking about the senior prom. They were sitting on her parents’ porch, watching the sunset. Loretta’s eyes sparkled as she described the dress her mother was making for the occasion.

Len had never considered attending the prom. He was an outsider, he didn’t know how to dance, and he was uneasy in crowds. “Let’s go see Exodus instead,” he suggested.

“We go to movies all the time,” Loretta said. “The prom is special, something you remember your whole life.”

“It’ll just be the same football idiots and snobs we see in school every day. I can’t wait to graduate and get away from them.”

“But Len,” she said anxiously, “my mother’s already spent a week sewing my dress. What’ll I tell her?”

“That’s not my fault. You should have asked me first.”

“It doesn’t work that way. Boys are supposed to do the asking.”

He clammed up, the years of abuse and taunts still boiling within him.

“Please, Len. All the other seniors will be there. Won’t you do it, just for me?” Loretta pleaded until her tears turned to anger. She rushed into the house, leaving him alone on the porch.

At school the next day she refused to speak to him. All her girlfriends roasted him with angry glares.

“Look, I’m sorry,” he said, confronting her in the hallway. “I’ll escort you to the prom if it’s that important.”

“You needn’t bother,” she replied icily. “I’ve already been asked.”

Chevron Ross is a pseudonym for someone unimportant. He is not a writer, but God keeps putting ideas into his head that somehow turn into stories. If you like them, be sure to offer God a prayer of thanks.

You can keep in touch with him here:

Chevron Ross will be awarding a $75 Amazon/BN GC to a randomly drawn winner via rafflecopter during the tour.  a Rafflecopter giveaway

I was given a copy of this book by the publisher but this is my honest review.

Posted by Vickie @Vickie's Kitchen and Garden at 4:00 AM

Good morning from Chevron Ross! Thanks to Vickie’s Kitchen and Garden for hosting today, and for her kind words on behalf of The Seven-Day Resurrection!

How did this day begin for you? The lead character in this novel gets the surprise of his life when he awakens to find his long-dead mother wandering about the living room, singing an old lullaby.

If you’ve got a family, this one’s for you.

How long have you had a passion for reading? Good luck on your book!!

Thank you for sharing your thoughts on this story and the author's bio and book details, this sounds like a wonderful story and I am looking forward to reading it

I liked the excerpt.

Hi Tami. I've been a reader all my life. I've always got a book going, no matter how busy I am. What about you?

With a Mom with dementia this sounds like quite a read. My sister and I never know what the next day will bring or what she will say when we talk to her on the phone.

Thank you for sharing, this sounds really interesting!

Hi Marisela. I'm excited about the interest this book is generating. It's a subject very close to my heart.

I enjoyed the excerpt, and The Seven Day Resurrection sounds like a fascinating , spine chilling read that I am looking forward to reading! Thanks for sharing it with me! Thanks, Vickie, for sharing your review! Have a wonderful day!

Thanks for your comments, Stormy!

The hour is late where I am. Time to say goodnight. Thanks again to Vickie’s Kitchen and Garden for hosting my blog tour today, and for her enthusiastic review of The Seven-Day Resurrection. If I miss any comments, I’ll respond in the morning.

If you wish to contact me, please email me at chevronross@gmail.com, or through my website, https://chevronross.net/. I’m always happy to hear from readers. You’re the reason I do this.

Sounds like a interesting book. I was a caregiver to my grandmother who had dementia. Look forward to reading it.

As you know, Richelle, caregiving for the elderly is a big commitment. You have done a noble thing in caring for your grandmother.

This sounds like a strange plot. I would have to learn more.

My DIL wants to read this book too.

I think I would enjoy reading this book too.

Thank you for sponsoring this giveaway.